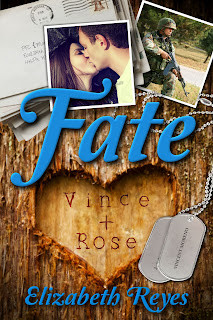 
Vincent was an odd one to understand. Having just met him he seemed nice enough yet his family was obviously making it clear that he needed to be watched closely. Sal had even warned him to be on his best behavior. Something Rose noticed had bothered Vincent.

Even before his explanation about his tattoo she didn’t think he looked bad but especially now after having spent some time talking to him she was even more convinced Sal was maybe being a little hard on him. He’d been perfectly respectful except for the few times he slipped and gave way to the foul language. But that didn’t bother Rose. Just about everyone at her school cussed.

They reached the front porch of Alex’s large home and Vincent smiled. “Yep it’s still here.” He walked up the stairs of the porch and sat down on the porch swing then patted the seat next to him. “Have a seat.”

He may be polite and sweet but one thing Rose had noticed is he was also smooth. She knew the type. Here she’d never even held a boys hand and yet she was already sure Vincent had done much more. Even at only sixteen and even though they’d just met, Rose could’ve sworn there’d been a few times he may’ve been flirting with her already. She even caught the way he’d checked out her legs and wasn’t at all phased when he realized she’d seen him do it. Instead he’d smirked in response to her own goofball embarrassed expression. He must think her so lame especially after her, “anti-drugs,” rant.

This after he’d just finished telling he’d tried them and even got a tattoo in the process. Sure he’d regretted it but she still could’ve spared him that and her, “my body is my temple” speech.

Determined to leave a better than lame impression, she cleared her throat ignoring her very inexperienced fifteen-year-old pounding heart and walked up the stairs.

He stood up just as she reached the porch swing. When he realized how close she actually was and their faces were now only inches apart she saw the corners of his lips lift slowly into one of the sexiest smiles Rose had ever witnessed. “That wasn’t very gentleman like of me.” Without taking his eyes off hers he waved his hand over the swing making her heart pound even harder. “Ladies first.”

She prayed he didn’t hear the enormous gulp she took as she sat down. Trying to understand why she was suddenly so nervous when she’d been just fine in the backyard with by the koi pond, she mentally chastised herself for being such a baby. Plenty of the girls on both the soccer and volleyball team at school had boyfriends. And she’d sat next to boys at school many times. She could do this without going into cardiac arrest for the love of Pete.

“What was that?” Vince smirked as he sat down next to her closer than she’d expected.

Her eyes grew wide as mortification set in. Had she said that aloud? She often thought out loud without even realizing, especially when she was nervous. Grace caught her all the time.

“Huh?” She raised her eyebrows feigning confusion and wondering how much of it she’d said aloud, trying desperately to appear cool about feeling his thigh against hers.

“You love Pete?” He sat so close to her she could feel the heat of his body radiate off him, and that sexy crooked smile of his wasn’t helping. “Is that your boyfriend?”

“No uh,” she shook her head feeling like a complete idiot. “It was nothing. I was thinking about something else.”

“Of a guy named Pete?” He pressed, humor lacing his eyes as he waited on Rose’s response.

“Well, no it’s,” she stammered the frustration mounting as his smirk grew bigger watching her make a total fool of herself. She never got this tongue tied. Ever. “It’s just a saying. You know ‘for the love of Pete.” She shook her head. “Never mind. But no I wasn’t thinking of any guy and I don’t have a boyfriend.”

He smiled even bigger now. “Really? Why’s that?”

Mercifully, Sal and Grace came around the corner and Rose loved them at that moment for their

They do get older as the story progresses but in case you're wondering who I'm envisioning for "young" Vince and hadn't already seen this here he is. *sigh* 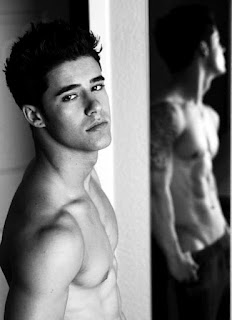 Click here to add Fate to your GoodReads To Read shelf now!
Posted by Elizabeth Reyes at 8:45 AM