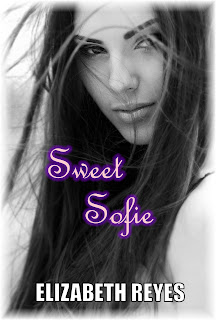 The set up: I had fun with Sweet Sofie. The book is broken up into years of her life,  here she is 15 and is paid a visit at the restaurant from by a boy from school but her brother Alex is there. WARNING: An older boy... coming on to Sofia.. and her older hot head brother is there. Expect the language to be harsh!

Things were different with Eric. She got to be around him all the time. Lately there’d been a change. Many times when they spoke, he gazed deep in her eyes no matter what the subject. Almost as if he was trying to tell her something without saying it. Her insides would always turn to mush around him now. She liked it. It was exciting.
She walked into the main dining room, her mother was coming toward her. “Oh there you are. There’s a young man here to see you.”
Sofia pinched her brows. A young man? “Who?”
“I don’t know. But he’s out front by the entrance.” Her mom rushed into the kitchen.
Sofia walked through the restaurant wondering where Alex could be. Sal was away in college and Angel was home but Alex was here somewhere. She didn’t want him embarrassing her. When she turned the corner to the front entrance, she almost groaned.
Ronald, a senior on her track team stood at the front entrance. He was new to the school and apparently one of the few that hadn’t heard about the cavemen in her life. Alex spoke to him.
“You’re kidding right?” Alex sounded almost amused.
“No, why is that a problem?”
“Of course it is.” Alex said.
Ronald turned his attention to Sofia when he saw her. “Hey Ron.”
“Hey, Sof.”
He walked away from Alex coming over to where Sofia stood. He pulled something out of his pocket. “I went to Old Town this weekend. I saw this and thought of you.”
He handed her one of the little tiny turtle bobble heads she’d mentioned collecting to him. She smiled taking it from him. Alex came over and stood behind her.
“Let me see that?” He took it from Sofia examining it as if he hadn’t seen all the ones she had just like it in her room. Then he asked, “How old are you, Ron?”
Ron gave him a strange look. “Eighteen.”
With that, Alex snapped the head off the tiny turtle and handed it back to Ron.
“Alex!” Sofia said mortified.
“What’s your problem, man?” Ron asked.
Romero and Eric walked through the front door oblivious to what was going on.
Alex got in his face. “My problem, asshole, is my sister is fifteen. I could call the cop’s on you, for trying to mess with a minor, but I’d rather kick your ass myself.”
A few customers walked in forcing Alex to refrain from doing anything. The only thing that would hold him back from hitting the guy, was his dad’s outrage if he made a scene in the restaurant. Still Sofia stepped in front of him to separate them. Alex didn’t make it easy. “Stop, Alex. We have customers.”
Ron held his hands up and looked at Sofia. “I didn’t know you were fifteen.” His eyes looked her up and down. “You sure don’t look fifteen.”
“Get out.” Alex said through his teeth.
Ronald smirked. “I’ll see you at school.”
He walked out, but of course Alex went after him. Eric and Romero followed. Sofia forced a smile and greeted the customers.
Sweet Sofie- A Moreno Brothers related YA novel. Coming this fall!
Posted by Elizabeth Reyes at 8:32 AM 8 comments: