Fate is live and available EVERYWHERE! 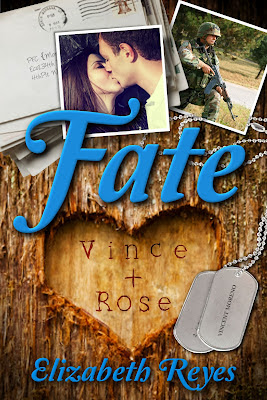 When Rose tagged along with her big sister to a baby shower the last thing she expected was to meet a guy. But this wasn’t just any guy. This was the exciting, sexy as sin, way out of her league black sheep of his family--Vincent Moreno. Even more surprising, this heart-stopping bad boy seemed interested in her.

Fate always had a way of interfering in Vince’s best-laid plans. His forced attendance to his annoyingly perfect cousin’s baby shower was no different. He was sure to be bored out of his skull, but instead, he met sweet little Rosie Zendejas.

What begins as a unlikely friendship between two very different teens turns into one of the most intense and passionate relationships that neither ever saw coming. But just like it had so many times in Vince’s troubled past, Fate steps in once again, threatening to take away the one thing he can’t seem to even breathe without now—Rose.

New giveaway 3-8-13!!
UPDATE! Giveaway is now over.
Thank you all for participating in the giveaway. I thought maybe I'd give a handful of signed copies away but decided there were so many who shared I rounded it up to lucky #7. Seven winners!
And the randomly picked winners are: Catherine Rouland Oznor, Mandy Bullock, Christina Labra, Kelly Filo, Gloria Lancia, Mimi Bennet, & Saralyn Miller! Thank you all SO much for your participation and continued support! Stay tuned for more giveaways!

Grab it now on Amazon

& on paper back via Amazon and CreateSpace

And in case you didn't catch it on my FB fan page: Bonus teaser!


Just then Ben saw her. He did a double take then smiled big. Candace gasped as he started toward them.

“I went to prom with him last year. We were good friends until he graduated and we sort of lost touch.” Rose flung her backpack over her back and went to meet him halfway since he was already walking toward them.

“You went to prom with him?” Candace said mouthing the words, “Oh my God,” to Alison.

Before Rose could respond to that, Ben was already there. “Look at you, sexy girl.” He blatantly checked her out from head to toe, slowing his gaze at her legs and her ridiculously short shorts as she and her friends came to a stop. He held his arms open with a smile so big and lustful it made her blush, and he actually groaned. “Bring them hot legs over here, girl. Damn!”

“The hell she will!” Vincent’s voice startled Rose. She turned just as he and Lorenzo walked up from behind her. "I'm her boyfriend. Who the fuck are you?"

Posted by Elizabeth Reyes at 6:36 AM