add Abel to your "to read" shelf now on
Goodreads!!

For now here is my inspiration of Abel. Because I know it may seem like he's real serious--sometimes too serious. He's not ALWAYS brooding. There are things that make this man smile! Just ask Nellie. ;) 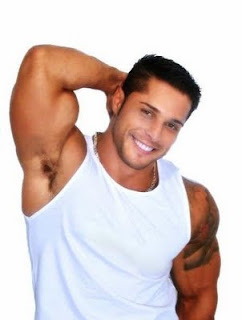 “I’m game if you’re game.” Nellie stared at him anxiously.

A man’s burning urges often ignore all logic. Abel Ayala knew this was all this was. A day of sipping on cocktails and lying around the deck of a cruise ship watching scantily-clad bikini-wearing women giving him go-ahead smiles had done it to him. Now he stood here, staring into the eyes of Nellie Gamboa, a divorcee eight years older than he was. From what he’d heard, she was still carrying a load of emotional baggage and probably still held a torch for her ex as well. She was someone he would not and should not be thinking of in terms of releasing some sexual tension. Damn it!

The fact that she’d turned her life around after what had been hailed by Roni, his friend’s wife and Nellie’s best friend, as one of the most grueling experiences any woman could go through, didn’t help. She’d gone and shaped up and did a complete makeover from the mousy woman he once remembered her being. If he hadn’t known it, he never would have even guessed that this sexy-as-hell woman would be hitting thirty soon. The sexual tension between them was a living breathing thing and had been going on for months now. Only up until now, he thought he might be imagining her requited feelings of lust.

His twenty-two-year-old ass had no business with a woman her age—no business getting involved with Roni’s best friend—especially knowing full well he’d never take a relationship with her seriously. But this changed things. Nellie was telling him that she was all for a no-strings-attached relationship. She was as interested in anything serious as he was. Coming off what she called the divorce from hell, she said she wanted to live it up now. He was glad now for the liquid courage Nellie’s wine had provided. If not for it, the offer may’ve never been voiced. She gone so far as to say that she was all for a fun-and-run experience and that she’d had her eye on him for some time.

It was still a risk, his brain reasoned. Things could sour. This could even cause a rift between him and his good friend’s wife if any hurt feelings came from this. But the already throbbing parts of his body said otherwise.

She tilted her head in that sexy way she did so often with curved lips that practically called out for his. To hell with logic! Just pulling her delicate frame against his immediately released some of the pent-up tension that had been building every time he’d been around her lately.

Swallowing hard, he stared at those lips—lips he’d wondered far too many times what they must taste like. “Hell yeah, I’m game,” he said as he took her mouth in his. Feeling a desire like none he’d ever felt before, he kissed her deeply, sucking her tongue and her lips. Damn, he wanted to eat her up.

He’d been fighting it—over thinking it—for months. This was just his ever-so-curious body’s reaction to finally giving into a longing that had peaked tonight as they’d enjoyed a few friendly dances. That’s all it was. But he needed more than just a kiss now. God, he wanted so much more, and since she was game . . . He pulled away from her just long enough to catch his breath and take a look around the almost-empty deck.

“I’d invite you back to my room, but Hector and Charlee might—”

She tugged his hand and was already on the move. “Let’s go back to mine.”

The second the elevator doors closed, Abel pushed her against the wall, pulling her by the waist to him, and his mouth and tongue sucked at every inch of hers. She panted softly, running her fingers through his hair as he moved down to her neck and sucked softly then a little rougher.

As the moving elevator came to a stop, Abel tore himself away. No sooner had the doors opened than they were out in a rush to her room. They turned the corner down the long corridor of rooms.

“How far down?” Abel asked.

“All the way to the end,” she replied, taking even longer strides.

Abel opened his eyes, looking down at her big brown eyes. Up until that moment, he’d never noticed the golden specks that were sprinkled throughout. The desire he saw in them now was as urgent as his own; although, he didn’t miss the slightest bit of apprehension. He couldn’t blame her. Anyone could walk in on them. He was certain he’d be able to hold the door closed against the force of any one person or maybe two if they pushed against it—at least until he was sure she was decent. But he didn’t want her doing anything she wasn’t completely certain about.

“Are you sure about this?” He slipped his finger under her panties, her moisture inviting him in all the way.

She gasped, closing her eyes at his touch, and nodded. “The kiss on the deck . . .” she said, her eyes remaining closed. Abel stared at her lips as she continued to speak a little more breathlessly with every caress of his finger to her silky wet skin. “The elevator . . . This . . . It’s exciting. I’ve never done something so . . .”

Nellie stopped to swallow, licking her lips, and Abel kissed her before she could finish. She didn’t have to. Suddenly the need to make this happen for her, make this experience with him be one she’d never forget, took over. It was just an ego thing. That’s all it was. What guy didn’t like knowing he was a woman’s first anything?

Abel reached for his wallet, but his lips never left hers. She kissed him back just as urgently, her hands grasping the front of his shirt. She gasped harder at the sound of his zipper opening. So he stopped and looked at her wide eyes. “I’m sure,” she said before he could ask again, pulling him to her, and he groaned against her mouth.

Working fast, he got the condom on and reached under her sundress, pulling her panties down. When they hit the floor, he lifted her easily off the ground. “Wrap your legs around me.”

She did and he adjusted her, groaning loudly as he entered her. Kissing her harder now as he fucked her against the door, he tried in vain to stifle his moaning, but it felt so damn good to be inside her. He’d been under the assumption that a woman who had been married, especially for several years, wouldn’t be this tight. She was tighter than some of the younger women he’d been with, and it felt just too damn good to finally be doing what he could only fantasize about up until now—so good it was almost alarming.

With her arms tightly wound around his neck, she began to pant with every thrust, and he went even harder, her panting growing more frantic as he felt her begin to pulsate around him each time he slid into her. Just as her entire body began to tremble with pleasure, he felt her arms tighten around his neck as she pulled her mouth away from him to breathe and cry out. Abel couldn’t hold it any longer either. Groaning again, he came in an explosive climax. Sinking deep inside her, he pushed his body against hers, burying his face in her sweet neck. Nellie clung onto him for dear life, gasping for air.

“We’re," Nellie started to say before stopping to catch her breath, “still going back to my room, right?”

Abel smiled, squeezing her naked behind and looked up into her somewhat embarrassed eyes. “You bet this hot little ass we are. That was just an appetizer. I hope you have all night, because what I have in mind is gonna take that long.”

Her eyes sparkled now with excitement, and she nodded. Hot damn! She was going to be more fun than he’d expected.

In case any of you are wondering if this will be another conflict about their age difference like in Noah's story. Let me assure it is not. There will be a whole other conflict these two will be dealing with in the midst of getting it on and on and... well you get what these two might be doing a lot of. Right? ;)

Posted by Elizabeth Reyes at 1:50 PM