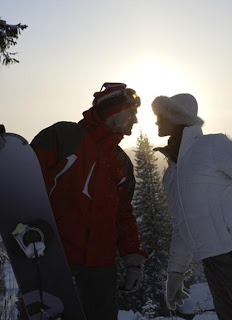 Set up: With Felix unable to make it up yet Bianca & Gio spend the day snowboarding.

As sweet as his smile was Bianca knew it was wrong to be enjoying it so much, so she forced her eyes away and glanced at his now freed boot. “Okay, so let me show you how to walk in these. Stand like me.”
They went over the basics on how to walk around on the board and all the do’s and don’ts. Then finally did a little skating. Although she tried her best, she wasn’t able to keep from laughing at his clumsiness. After falling for the third time Bianca meant to keep her laughter to a minimum but she did the stupid squeak thing that got her going good.
She hid her face behind her gloved hands and peeked between her fingers as she continued to laugh. Gio didn’t even attempt to get up. Instead, he brought his knees up and rested his arms on them looking very exhausted already but he couldn’t hide the smile. He squinted up at her. “You’re having way too much fun at my expense. You know if I didn’t know any better I’d say you planned this. Probably planned the time you taught Felix, too. For your own amusement.”
Bianca managed to calm her laughter but still giggled. “I did not!” She pouted but somehow she didn’t think he’d buy into it since her lip was still quivering from her stifled laughing. “My boyfriend was supposed to be here today remember?” As the laughter ceased she was able to pout more convincingly until she saw the appalled look on his face and his eyes go wide open.
“Am I supposed to feel sorry for you now after you’ve laughed at me all morning?”
With that, she was at it again. “I wasn’t laughing at you.” She offered him her hand and he took it. “I was laughing with you. We’re having fun, right?”
With a grunt and a pull from Bianca, he was on his feet again. “Yeah, my ass is having a blast.” Gio dusted his behind off.
Bianca managed to calm her laughing and pulled her phone out. “Not to scare you or anything but lets get each other’s number just in case we get separated. Sometimes these boards have a mind of their own. If anything happens we can find each other easier this way.”
“Somehow,” Gio said unzipping his jacket. “I don’t think I’ll hear my phone ringing under all these layers but if you say so.”
“Yes, I say so. You’d be surprised.”
They programmed each others number in their phones but when Gio stuck his back in his jacket he motioned up to the mountain. “I hate to break it to you, but I don’t think you’re gonna get me up there today.”
“You have to!” Bianca’s laughing mood was gone now. He couldn’t be serious but he shook his head. “Really? A big tough boxer like you is gonna let a few tumbles scare him?”
Gio laughed at that. “Hey, lets not get personal.” Taking a deep breath, he took in the mountain again. “Maybe after I’ve had some lunch. I know we had a big breakfast but I’ve worked up an appetite.”
“Agreed,” she said taking her gloves off and pushed them into her jacket pocket. She reached her hand out to him. “Take my hand. I don’t want you falling again and changing your mind.”
Bianca meant to just latch her hand in his to help him back to the bench and she thought he’d keep his gloves on. But he took his glove off before reaching for her hand and their fingers automatically laced.
With a gulp she glanced at him as he concentrated on his footing. There was no way he was feeling what she was feeling from the simple touch of his hand. Gio was completely engrossed in making sure he didn’t fall. She squeezed his hand as his foot slipped slightly and he squeezed back finally looking at her with a smile. Her heart rate had already sped up the second their fingers touched. It accelerated even more now. Jesus, could he be more beautiful?


Add to your GoodReads "To Read" Shelf now!
Posted by Elizabeth Reyes at 10:49 PM