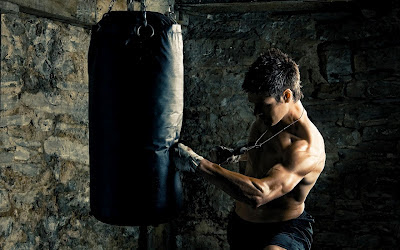 This teaser is more of a set up... so you'll understand the upcoming teasers. Where they're at and why. The snow...  =) *unedited*

Set up: It's Gio's first day back at 5th Street since the tragic event several weeks prior where Trinidad lost his life. His childhood best friend Felix, who is now welterweight champion of the world stops by to visit on his way to the picturesque snowy town of Big Bear to train for his next big fight. Surrounded by his entourage and the media all wanting a piece of Felix, Gio decides not to interrupt and  heads for the locker room.

Gio hadn’t been in there very long when he heard a commotion and then loud voices coming toward him. Felix and Abel walked to him. Felix had a big smile on his face. “Hey, my man! How’s it going?”
“I’m doing alright.” Gio reached out his hand to shake Felix’s but Felix pulled him in for a man hug.
Felix pulled back to face him and the smile slowly collapsed. “I heard about what happened, man. But you know what? This shit happens in boxing. They say you’re really beating yourself up about it. You can’t do that, G. It’s not your fault and hey, it might even happen again.”
“No it won’t,” Gio said turning back to his locker. “Not to me anyway. Because I’m not fighting anymore.”
Felix glanced back at Abel who shrugged leaning against a row of lockers. “What do you mean you’re not fighting anymore? You can’t give up because of this one thing. Gio, it wasn’t your fault.”
“I know.” Gio stuffed his bag in the locker. “But I’m done.”
“Dude, so what are you gonna do now?”
“I’m gonna train. There is some real good talent coming in here lately who I think have a lot of potential. I’ll focus on getting them ready.”
Felix’s eyes opened wide then he smiled. “Fuck that. If you’re gonna train, come train with me. I need a good sparring partner and you were one of my best.”
Gio stared at him for a moment not sure if he was serious. “Train with you?”
“Yeah, it’d be perfect. This fight I got coming up in a few of months is gonna be be tough. I’m headed up to Big Bear to train there. You can come with me. It’s only a couple of hours from here so if you ever need to come back home for whatever you can just drive back.”
Gio and Abel exchanged glances. “Are you serious?”
“Hell, yeah,” Felix laughed. “This will be awesome. You’ll be well compensated, too. Because even though we’ll do the whole snowboarding and partying with all the snow bunnies up there, I’m putting your ass to work. I really need to get in shape. This guy I'm fighting is supposed to be the best thing outta the Philipines since Pacquiao. I got my work cut out for me. ”
“Yeah you do," Abel agreed then turned to Gio. "Some time away might do you some good, too. Who knows sparring with Felix might get you itching to get back in the ring.”
Gio wasn’t sure about that but he was right about one thing. The time away might do him some good. “When are you headed up?”
Felix smiled. “Next week. I’ll be up there for two months straight. ‘Course there’s gonna be times I’ll have to leave. Since I’ll be in California, my agents lined up some stuff for me to promote the fight. Television appearances, morning radio shows, shit like that but I’ll only be gone for two maybe three days tops when I do that stuff. You can stay up there and ski or go snowboarding while I’m gone.” He winked with a smirk. “I’ll make sure you have company.”
Gio chuckled knowing exactly what he meant. “Speaking of, who’s this chick with you today? Anyone I should know about before I make an ass of myself like I did last time?”
“Nah, she’s a jazz singer but she’s small potatoes. I met her in Vegas after one of my fights. She does have her own show out there but nothing you’d know about.”
“So she your new chick? “ Abel asked.
Felix laughed. “C’mon brother you know me. Life’s too short to settle on just one chick. Although there is one who seriously has me considering it.”
“No way,” Gio said closing his locker. He’d heard rumors about Felix and a girl from Big Bear but just like all the other rumors he’d heard about Felix, Gio hadn’t thought anything of it.
“Hey,” Felix said lifting his hands in front of him. “Stranger things have happened. So what do you say? You in?”
“I’ll give it some thought and let you know in a couple of days. I gotta talk to Jack, too. This is my first day back and already I gotta tell him I may be leaving for two months.”
“I doubt he’ll have a problem with it,” Abel said “He’ll probably agree you could use the time away.”
Gio frowned. “Still, I gotta run it past him first.”
Gio had to admit the more he thought about it, the more he agreed with Abel that getting away might do him some good.
As it turned out not only was Abel right about Jack agreeing that Gio could use the time away, Jack insisted Gio did.

Add Gio on your GoodReads "To Read" shelf here.

And as always, I love to hear your feedback. So looking forward to it!  =D
Posted by Elizabeth Reyes at 9:48 AM